RICH HISTORY DATING BACK TO 1839

Back in 1839, The " ABEONA " landed the Hawson Family in Happy Valley. They brought along about 60 Timor ponies, the ancestors of the Coffin Bay ponies.  The Timor ponies were transported by Capitan Hawson to the Eyre Peninsular from the Rajah of Sumatra for breeding. Then, in 1841, Edward John Eyre purchased a pregnant Timor pony for about 25 pounds. during an expedition, the mare gave birth to a foal at Streaky Bay and the foal accompanied the well known explorer on his expedition.
​
In 1847, all of Captain Hawson's Timor ponies were moved to Coffin Bay Run, where they would have new pastures to expand his ever-growing business.
Somewhere within 1857 and 1858,Coffin Bay Run was sold to W R Mortlock, Mortlock saw  the potential of this hardy little pony and decided to bring in selected stallions to expand their versatility by adding height and enhancing natural characteristics. The stallions were believed to be Welsh cobs, thoroughbreds and Arabians. After Mortlock bred in the many desirable characteristics of each type, buyers began coming to Coffin Bay from near and far to purchase 4 in hand, matched pairs, polo ponies and army remounts. Their distinct characteristics made them desirable for all kinds of purposes from work to horse shows and more.

​By the end of Mortlock's ownership of Coffin Bay Run in 1927, the run had become erratic and progress had taken its toll on financial success of the breeding horses. The horses had become simply unmanageable and wild to a large degree. New owner Martin Cash found the horses at Coffin Bay Run to be so uncontrollable and overpopulated that he authorised culling and mass destruction to reduce the population to a more controllable number.

In 1932, yet another owner, the Morgan family, purchased Coffin Bay Run. During the depression and second world war, the pony was once again in high demand for workers in the area, as petrol became unaffordable and unobtainable. . The ponies then became invaluable as the useable machinery sat rusting in paddocks.

​After Peace was declared in 1945, the demand for ponies declined as machinery became usable once again. Moss Morgan made a modest living, which was partly assisted by the catching and breaking of wild ponies for sale to locals as riding ponies. Many locals in Coffin Bay can still recall the ponies as buck jumpers at the local rodeos.

In 1972, Geoff Morgan ceded the Coffin Bay Run to the South Australia Government to be used as a National Park. This was the end of the pastoral industry in Coffin Bay. Eight years later, the ponies of Coffin Bay, faced removal from their long-time home under the Parks and Wildlife 'pest control' program. Concerned locals banded together to form the Coffin Bay Pony Society, a volunteer group dedicated to helping the ponies in the park. Negotiations began for a management and control program which would allow a compromise, whereby the ponies would be allowed to stay in their home of over 100 years but in a controlled and managed park setting. 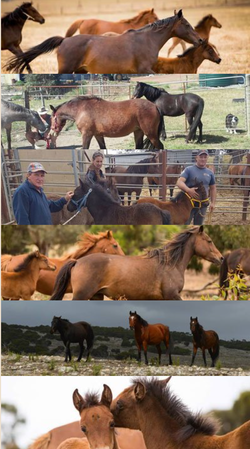 Soon after, in 1991 & 1992, the first management agreement was entered between the Coffin Bay Pony Society and the National Parks and Wildlife. This agreement allowed the ponies to stay because of their historical significance to the area. To minimize their effect on the local environment, only a small herd in the wild would be maintained. The agreement allowed for a herd of 20 mares and their offspring and one stallion. Trapping would occur yearly and the excess stock would be removed. These ponies would then be handled and auctioned, with a predetermined price per head being paid to the Parks and Wildlife Department. This agreement has been monitored and reassessed each year since inception, and updated if the need arises.
​
The Coffin Bay pony's future was again uncertain in 1999. The release of the Parks and Wildlife’s Draft Management Plan and the proposal of a Wilderness Zone for the area would most certainly impinge on the grazing and breeding area of the small herd left in the Park and severely restrict the Pony Society’s capabilities to manage and monitor the herd as they have done in the past.

Minister John Hill signed away the ponies' future in the park in 2003. After much public outcry about the lack of consultation from the Office of Environment and Heritage, the Society has been in deep discussions with the department about the purchase of land near the Coffin Bay township. This land would be their home. The historic ponies were moved early in 2004 after the mares had their foals. An intensive fundraising program was set up to purchase this land for the Coffin Bay Ponies.
In February 2004, the mares and foals were successfully moved to their new home on the land known as Brumbies Run. The historic ponies have settled well in their new land with intensive fundraising underway. The ponies had made Brumbies Run their new home. The mares were rearing their foals and all looked good for the future. Now the mares were being looked after and fed on a regular basis (due to a massive cut in grazing land), and the foals were growing out to become bigger ponies or small Galloways.

In 2008, the Society changed their name from pony to brumby. There were reasons for this, the first being that some ponies were outgrowing the pony size: ponies are 14hh and under; Galloways are over 14hh. Second, there was now a new society, Australia wide, known as The Australian Brumby Alliance. We are part of this society. Their main aim is to save the brumby and have them recognized as part of Australian heritage. A united body lobbying governments, National Parks and any other sources could be great benefit to all brumby groups. Hopefully with a voice Australia-wide, the brumby will be acknowledged for their heritage value and can roam in the national parks as they have done for generations.
In 2009 Brumbies Run was established and facilities were added. There were now 2 toilet blocks and showers, a BBQ area, permanent yards for handling the brumbies and a hay shed under construction. 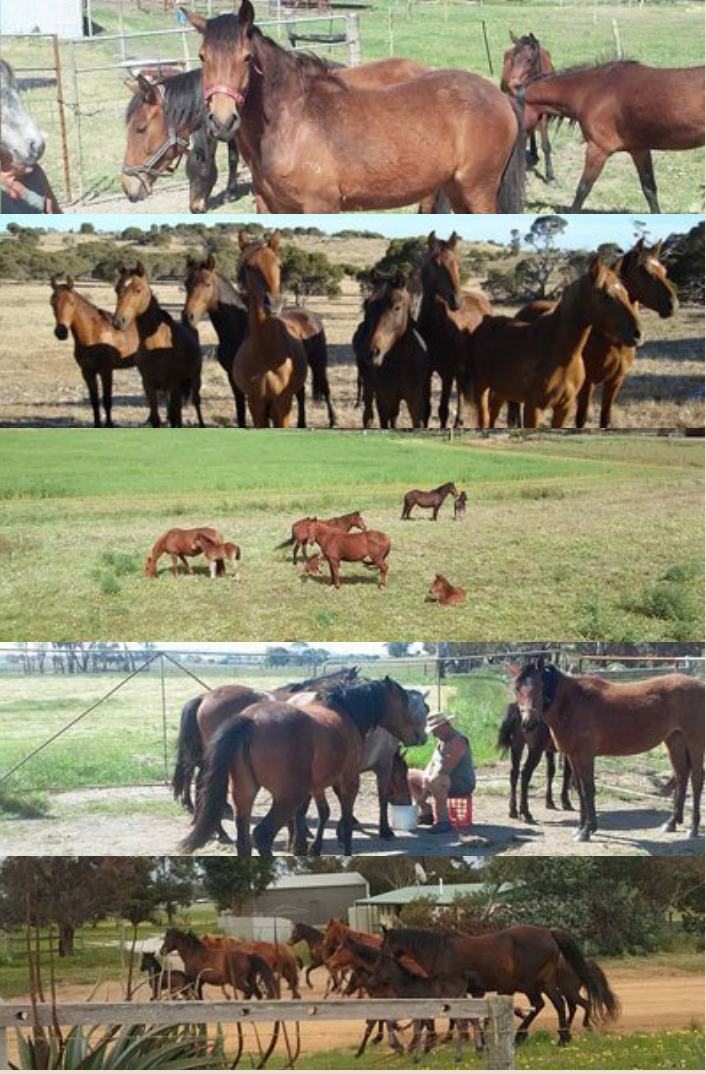 In 2010, the annual auction was moved to Easter Saturday. The Society decided that if the demand is there, Brumbies can be sold outside of the auction day.

All mares that are being used in the breeding program are descendants from the original stock that was shipped to the Eyre Peninsula in 1839 from the Timor Islands. This same year, a new stallion was introduced. He is from the Oxley Heritage Brumby group which roam in the Oxley National Park in N.S.W, and has many similar characteristics to our own herd.

To secure a permanent home for our brumbies, our preservation society is required to pay the S.A. Government $300,000 to keep the land. While the first $100,000 has been thankfully raised, we still have another $200,000 that must be paid within 50 years to gain the freehold title, which is critical to the future of the wild ponies.


The active members are mostly farmers.
​If you are local and can assist actively please email us on.   coffinbaybrumby@yahoo.com.au
or ring
President - Jody Scharfe
Phone Mb: 0429 413 263
Email: jscharfe@bigpond.net.au

DONATIONS
The Society is always looking for donations and  new members, to support this worthwhile cause. Without your assistance the Coffin Bay brumby is in danger of becoming extinct.
Donations are gratefully accepted.
​
MEMBERSHIP
if you are interested in helping preserve these special animals become a member.
Click her for to make a donation or to become a member
​Captain Henry Cowell Hawson and Frances Maria Brodribb
Captain Henry Cowell Hawson was born on 26 October 1814, Mrs Whiting's house, Dartmouth, the eldest of eleven children born to Henry Hawson and Elizabeth Emlyn Cowell. He lived in Dartmouth, Devon until he was three and a half, and then his family moved to St John's, Newfoundland, where they lived until early in 1834, when the whole family of two adults and twelve children departed on their brigantine, the Abeona to sail to Brazil, South Africa and Australia, where after trying several places, eventually settled in Port Lincoln. At age 19 Henry had become the Master of the Abeona in Brazil & continued to Captain her in trading ventures to Timor and Australian ports. Henry also Captained other ships, such as the Lord Hobart to Sydney and Timor, the Lively and the Billow. The Abeona was sold on the 18th August 1840.
In 1839 Henry Cowell Hawson led several expeditions to explore the region around Port Lincoln, accompanied by his brothers Edward and Thomas and other local men.  A range of Hills were for a time called Hawson Ranges after him, but later renamed Marble Ranges.
On the 5th September 1840 at St David's Cathedral, Hobart Town he married Frances Maria Brodribb, the daughter of William Adams Brodribb and Prudence Jane Keene. Her father was a Solicitor and  had been transported to Van Diemen's Land in 1817 after being found guilty of administering an unlawful oath to a group of men, who while poaching, killed a man. Luckily for William he was freed on the voyage over so he could replace a sick clerk & by the time he arrived at Hobart Town was announced in the paper as part of Governor Sorrell's party. His wife and four children joined him and five more children were born to the family, including Frances Maria on the 10th March 1822 at Green Ponds.
Henry's parents came across from Port Lincoln to Hobart Town for the wedding and it was while they were away that the tragic death of 12 year old Francis Tapley Hawson occurred after he was speared by aboriginals. The family had otherwise been luckier than most; of their thirteen children none had died in infancy & only Frank didn't live till adulthood. 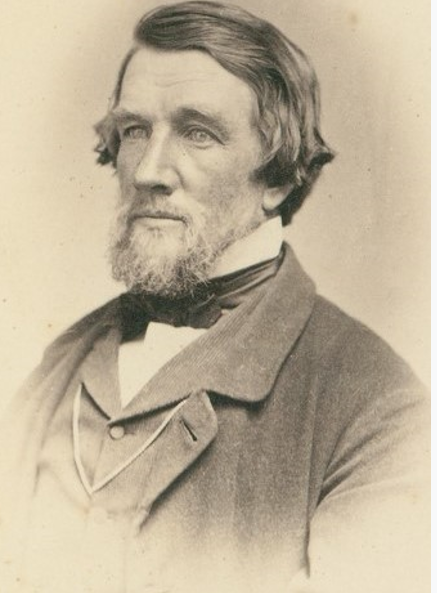 ​
He was a grazier and politician in colonial South Australia, born at Moat House, Melbourn, Cambridgeshire, England. Mortlock arrived in South Australia on the Imaum of Muscat on 9 November 1843. In 1850 at Port Lincoln he married Margaret, 18-year-old daughter of John Tennant who had arrived in South Australia from Scotland in 1839. He was a veterinary surgeon and sheep inspector in Adelaide for a period. In 1847, he occupied land near Port Lincoln that would subsequently become Yalluna Station, and he resigned his inspector role in 1856. He acquired three more leases in 1867-68: the Mount Arden, Pichi Richi, and Yudnapinna Stations.[1]
He was elected to the South Australian House of Assembly at the 1868 election, representing Flinders, but did not contest the 1870 election.[1][3] He was elected for Flinders a second time at the 1871 election, but again declined to recontest at the 1875 election, and advertised that he was leaving the colony soon afterwards. He was elected for a third time at the 1878 election and re-elected in 1881, before being defeated in 1884, just weeks before his death